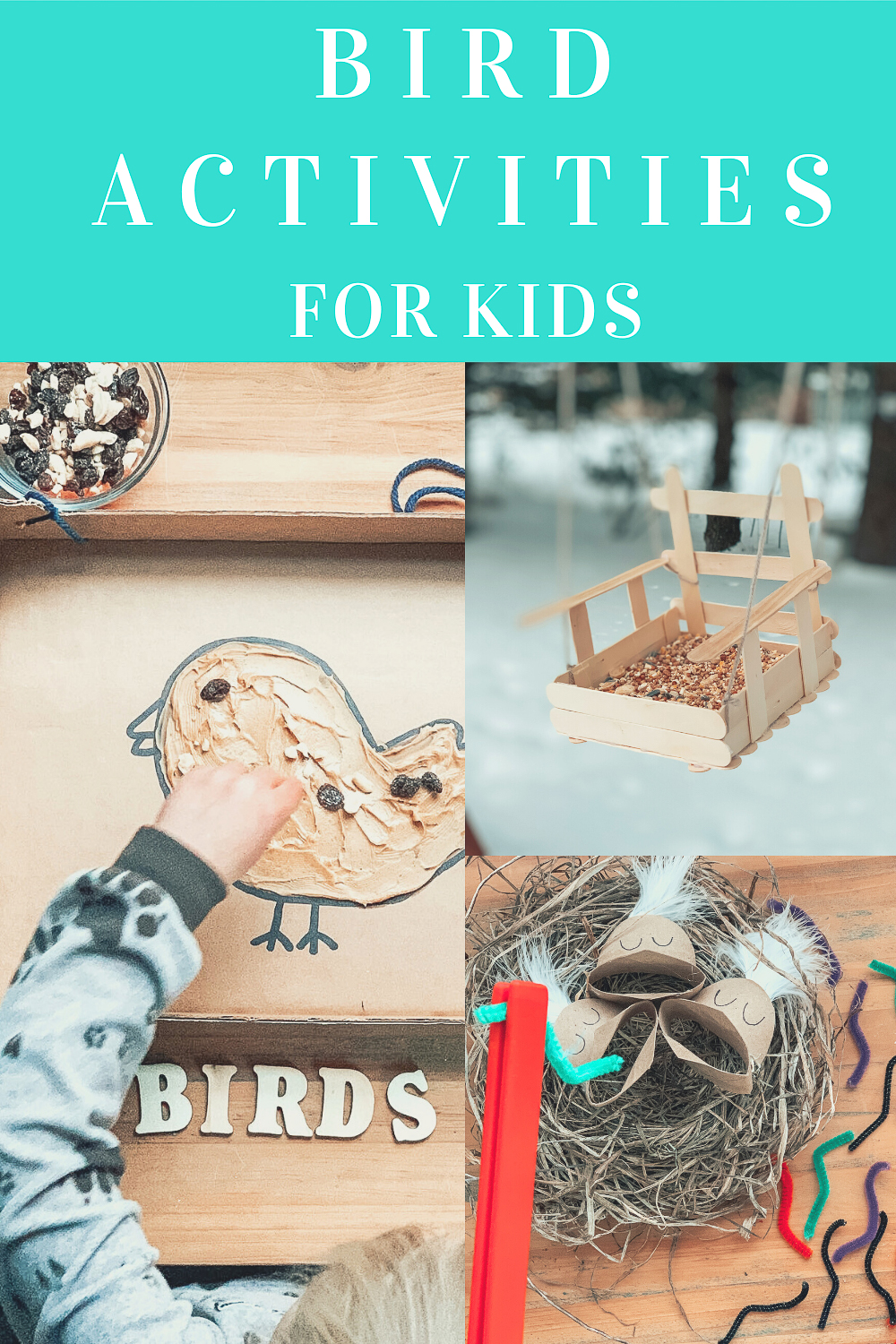 This past winter I decided to try to make a few different bird feeders with my sons. I had no idea it would spark a love for watching birds in both me and my boys. We loved making our bird feeders and it was a great start. With our crazy Michigan weather, they didn’t last forever so we did end up buying a permanent bird feeder. We also bought a bird identification book called Birds Of Michigan. They have bird books for all of the different states. We love this book because it is divided by colors and is easy to figure out which kind of bird is at our feeder. Here are a few bird feeders and bird activities that we have tried over the last few months. 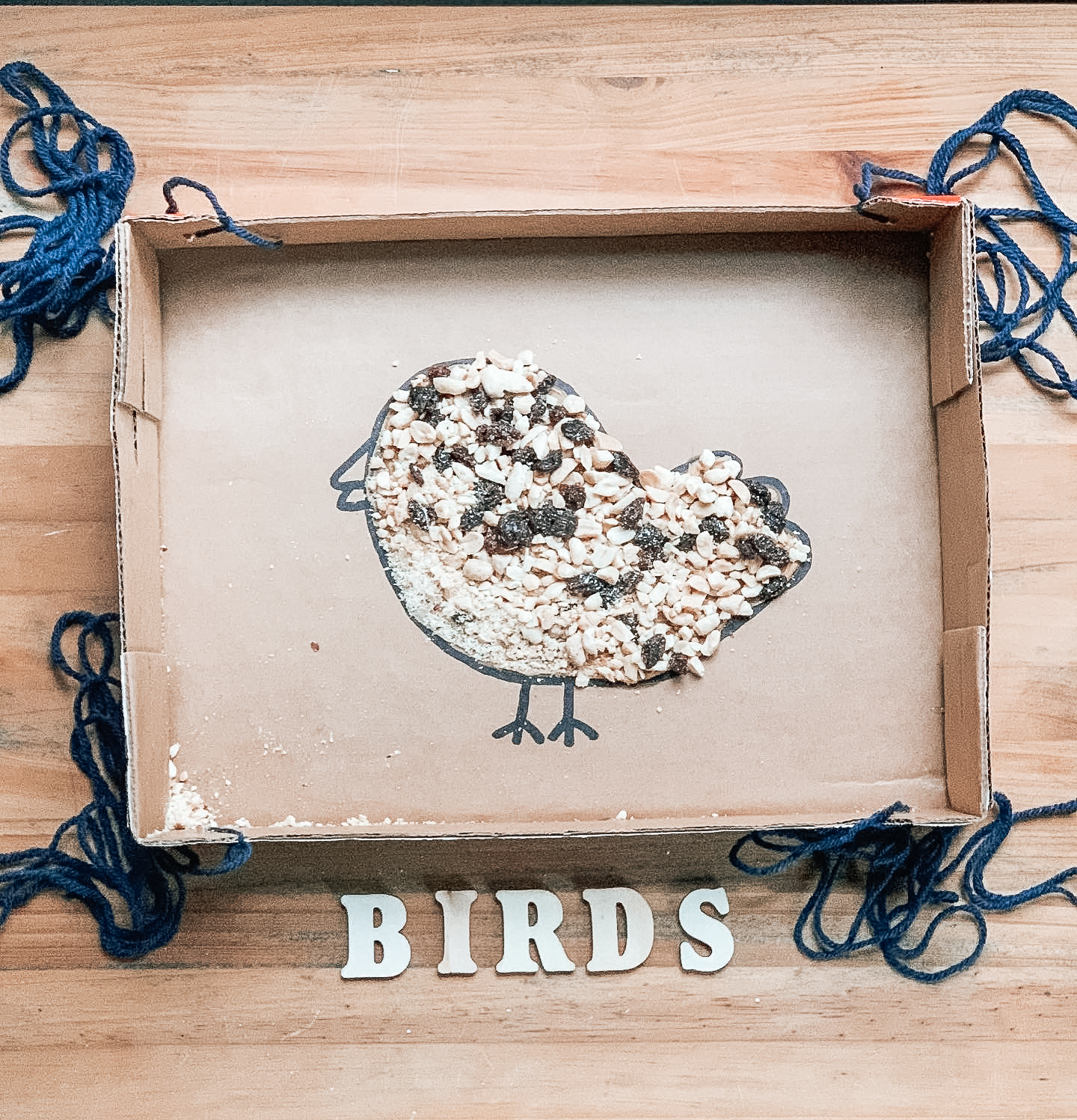 This bird feeder was so simple and cute to make.

How We Made Our Box Bird Feeder:

First, I drew a bird onto a cardboard box. A shoe box lid or shallow box works great for this project.

Next, I covered the bird with peanut butter. 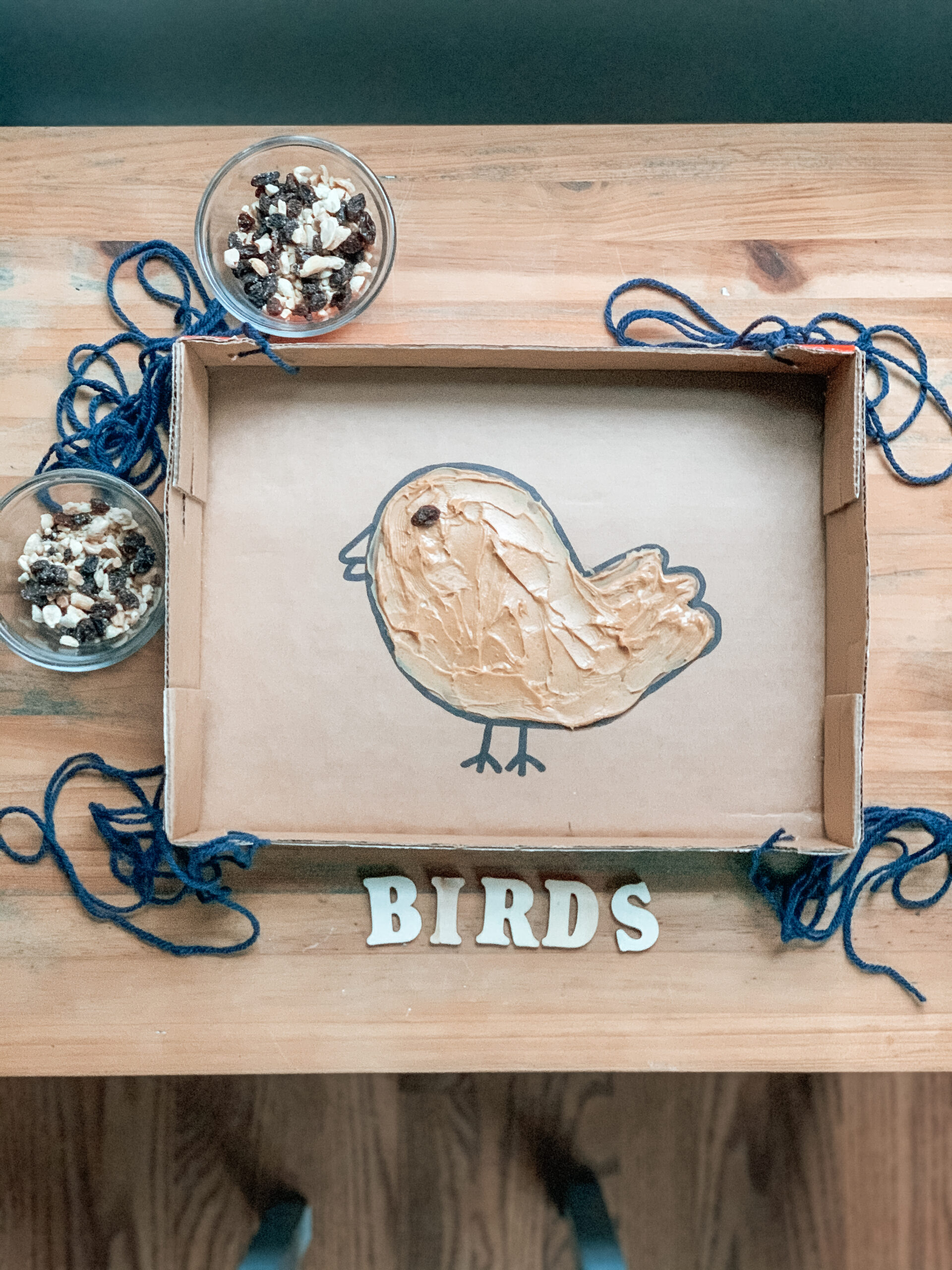 Then, I cut four holes into the sides of the box. I couldn’t find a hole puncher at the time so I used golf tees to cut the holes and they worked great.

Once the holes were made, I cut four long pieces of string and tied them to each hole in the box.

Next, I had my son fill the “bird” with bird food. We used crushed up peanuts and raisins but weren’t able to attract any birds with that type of food. Next time we will use bird seed. 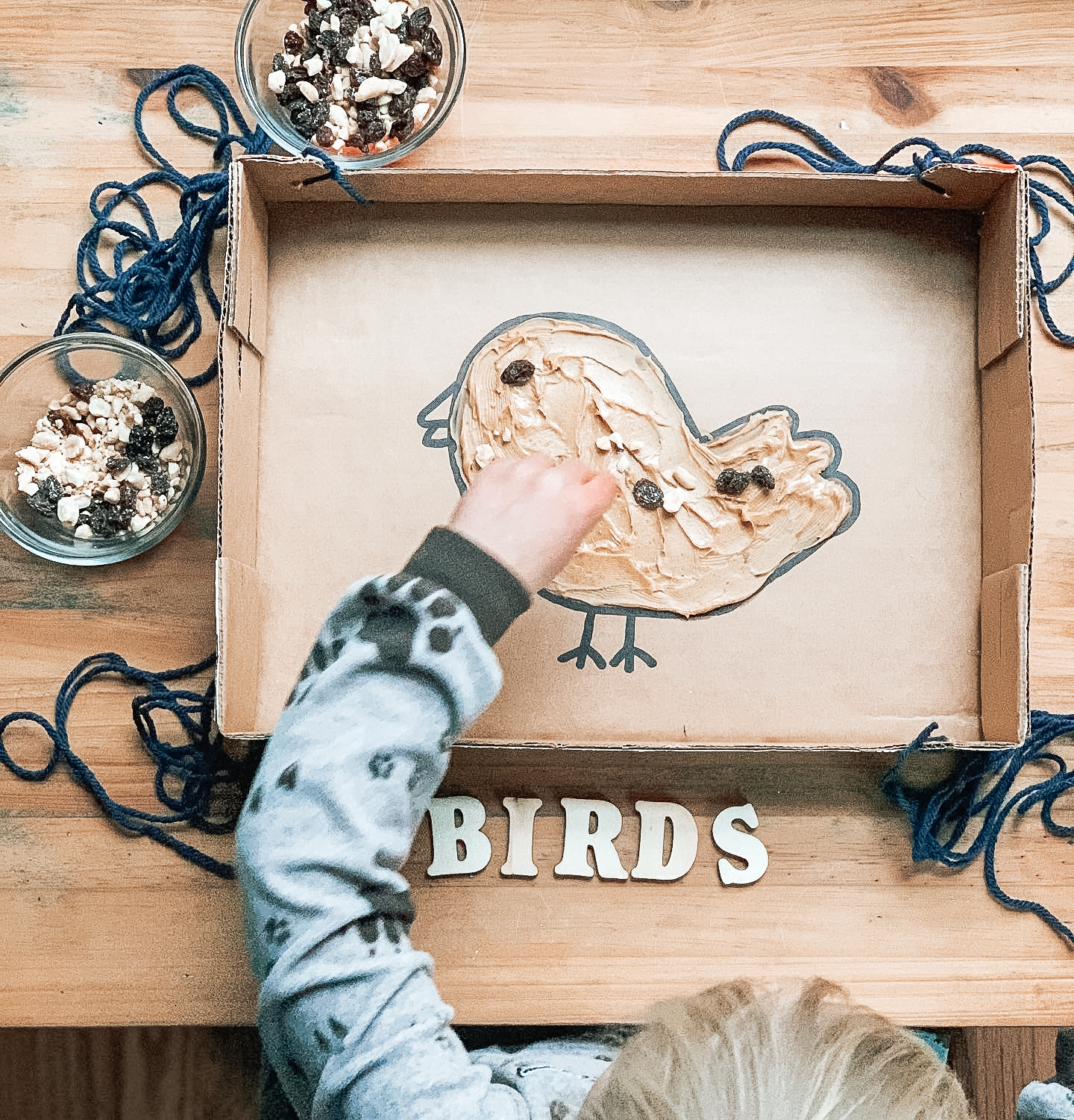 Finally, we hung it outside and waited for the birds to arrive. 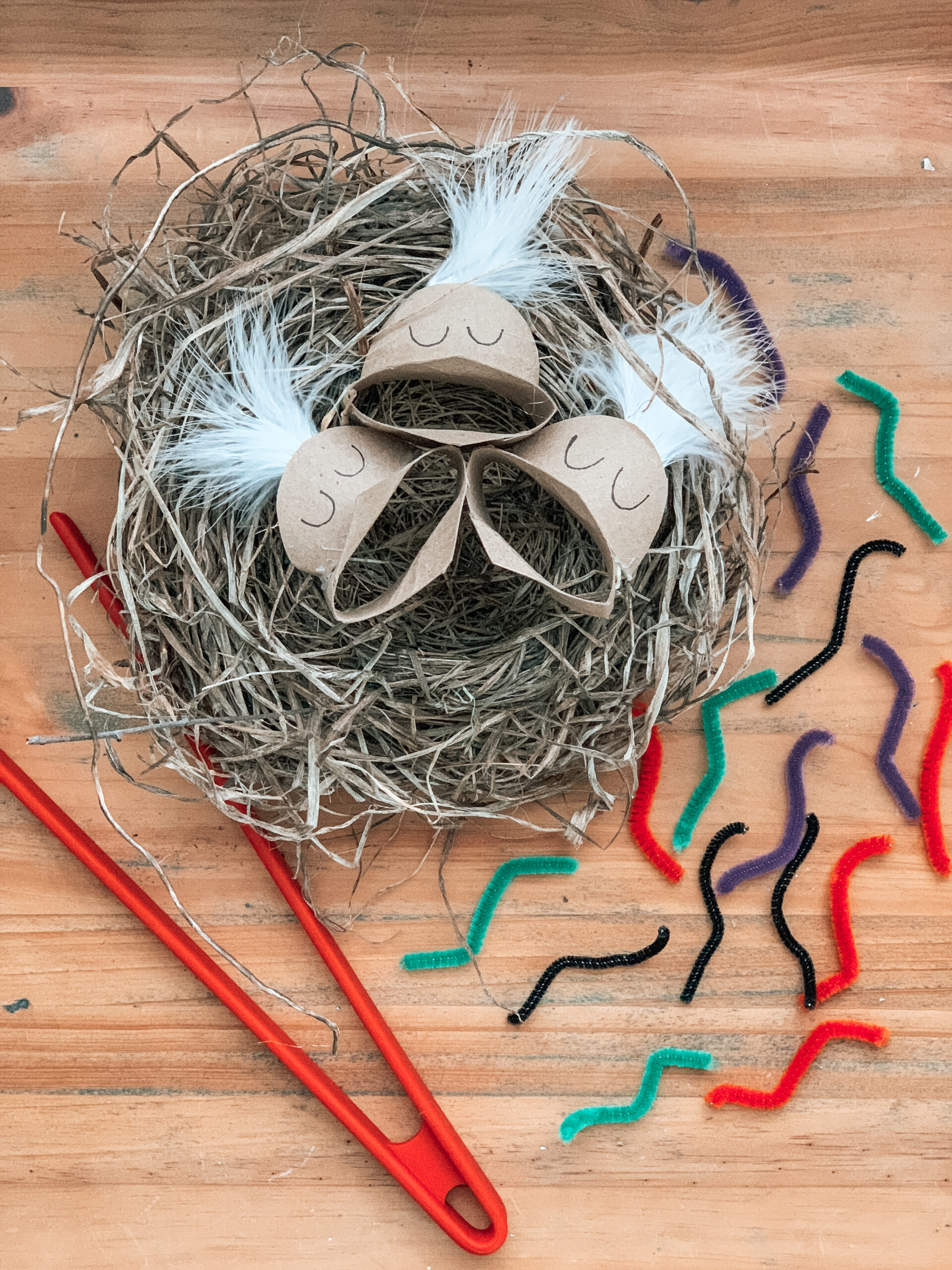 My mom found an empty, deserted nest and gave it to us to make an activity with. I thought it would be fun to create a bird feeding fine motor activity. I’ll admit these little toilet paper baby birds ended up looking a little creepy but both of my boys had a lot of fun feeding them.

How I Made This “Feed The Birds” Activity:

First, I cut a third of the toilet paper roll off to create the bird beaks. Then I cut the top of the smaller portion to have a triangular point. 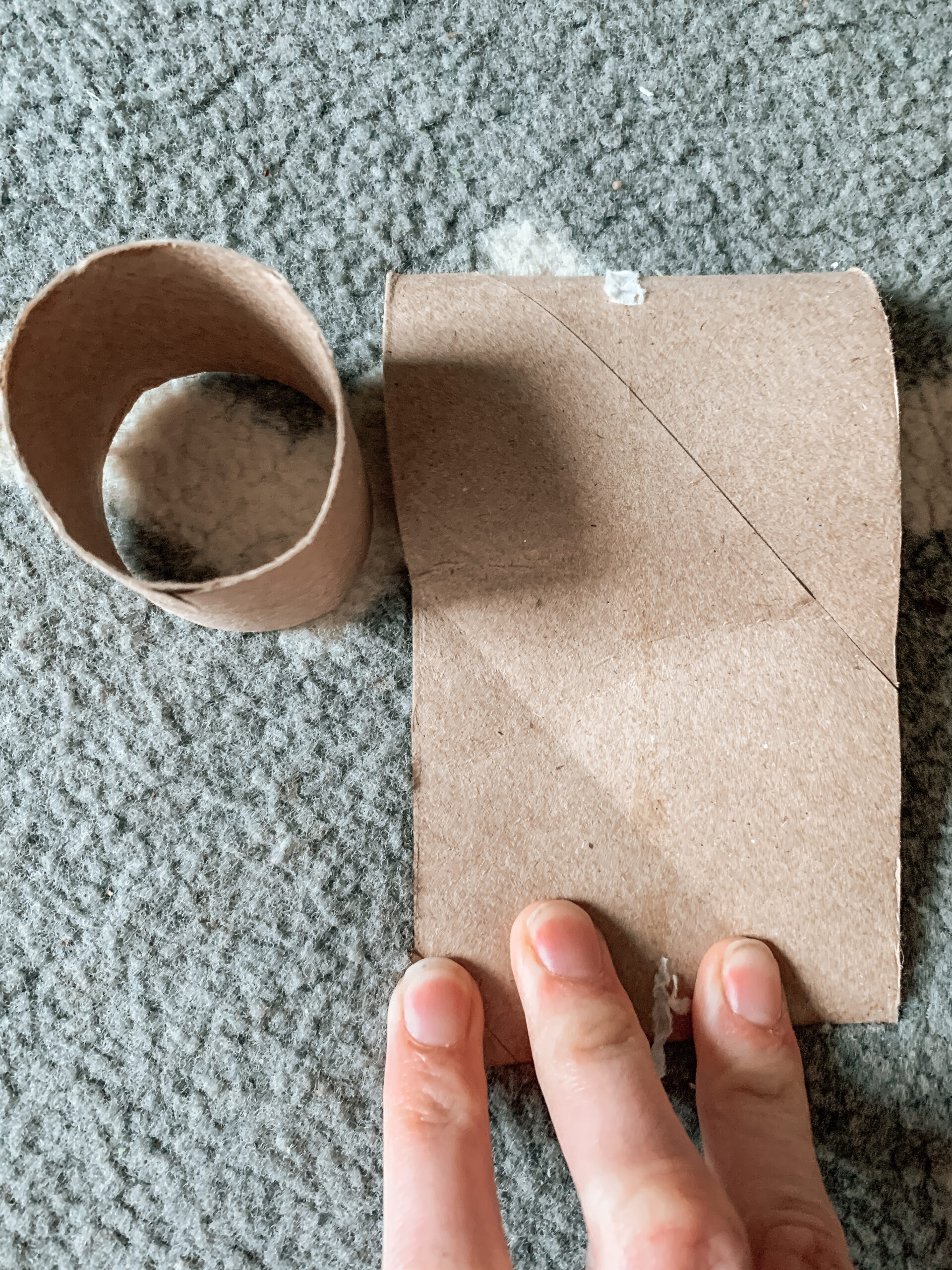 Then, I cut a line down the larger piece of toilet paper roll so that I could flatten it. I then cut the flattened piece into a dome shape for the head of the bird and hot glued it onto the “beak” portion. 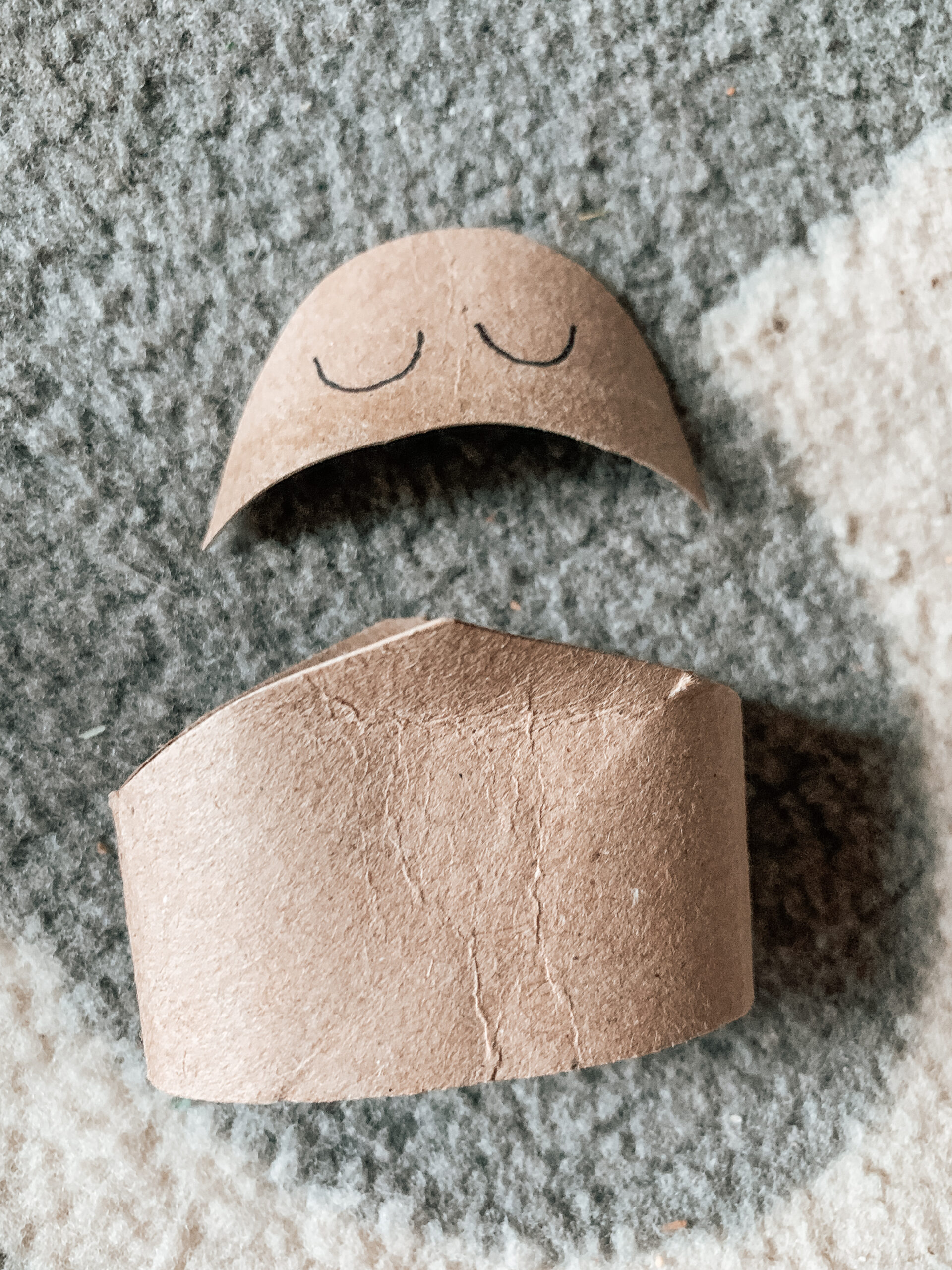 To finish the birds, I taped a little feather on the top, back portion of their heads and drew on eyes.

Once the birds were completed, I placed them into the bird nest.

Next, I cut pipe cleaners into 4 pieces to create “worms”

I gave my sons tongs and had them use the tongs to grab the pipe cleaner worms and feed them to the toilet paper roll birds. 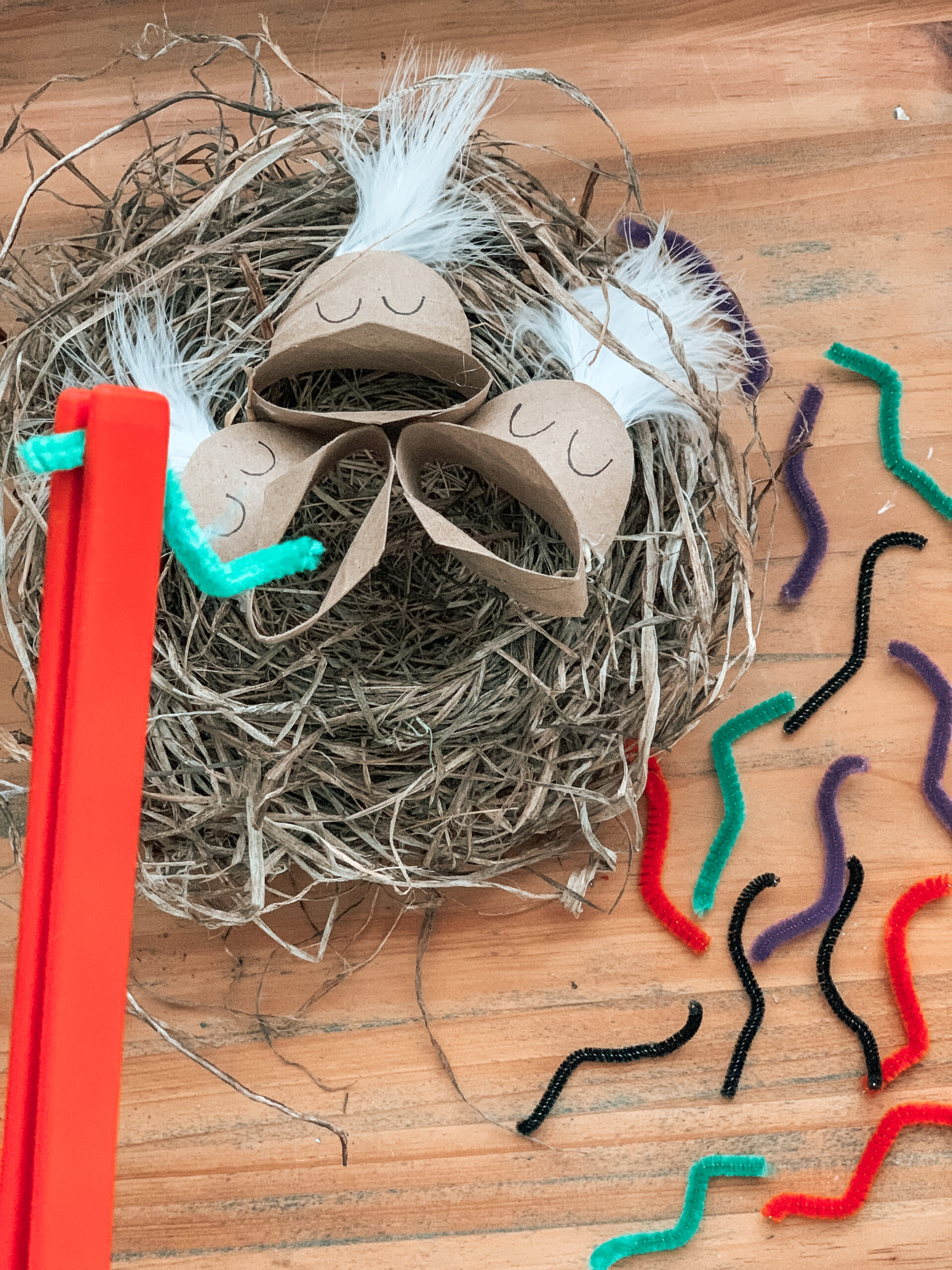 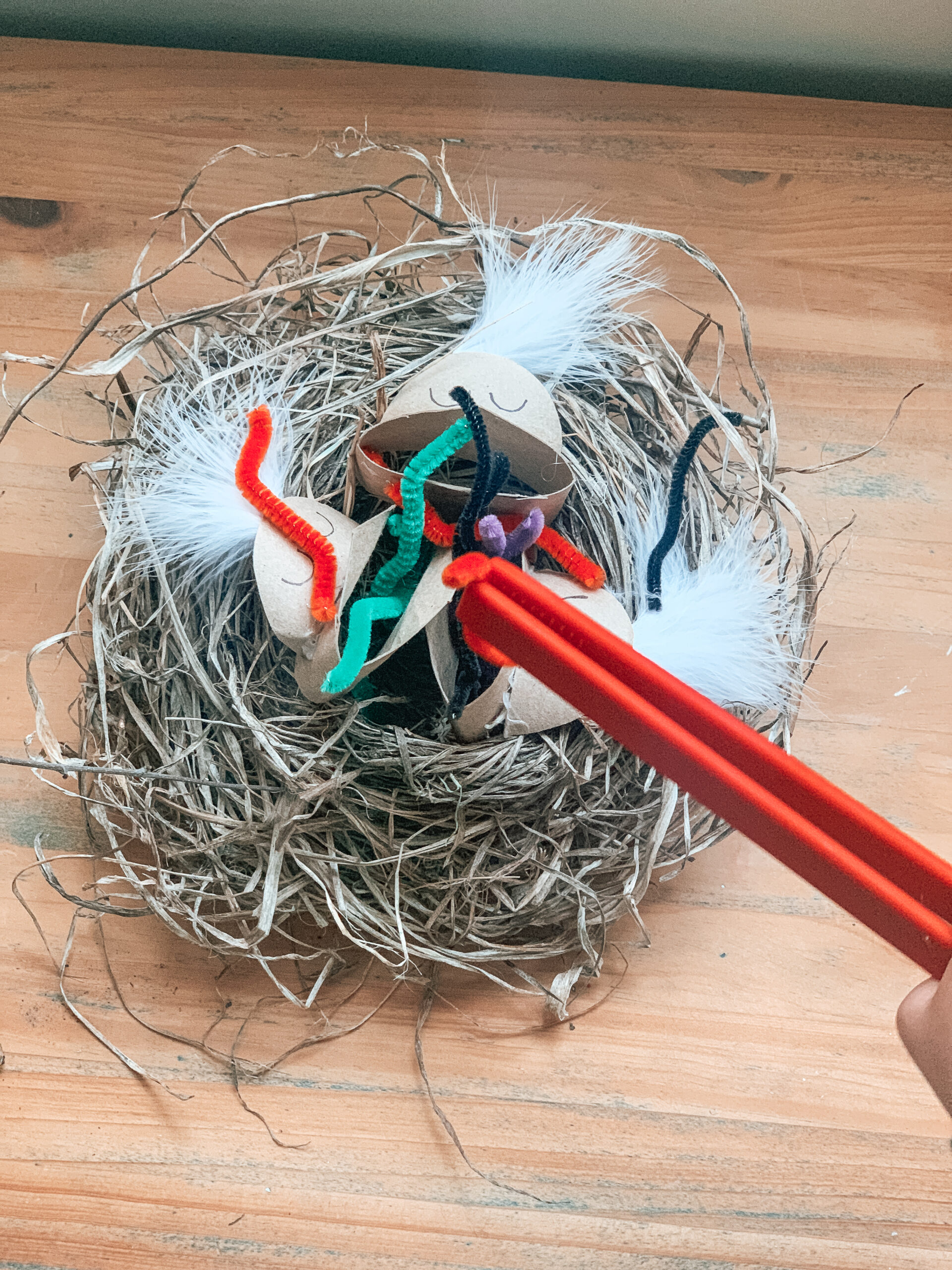 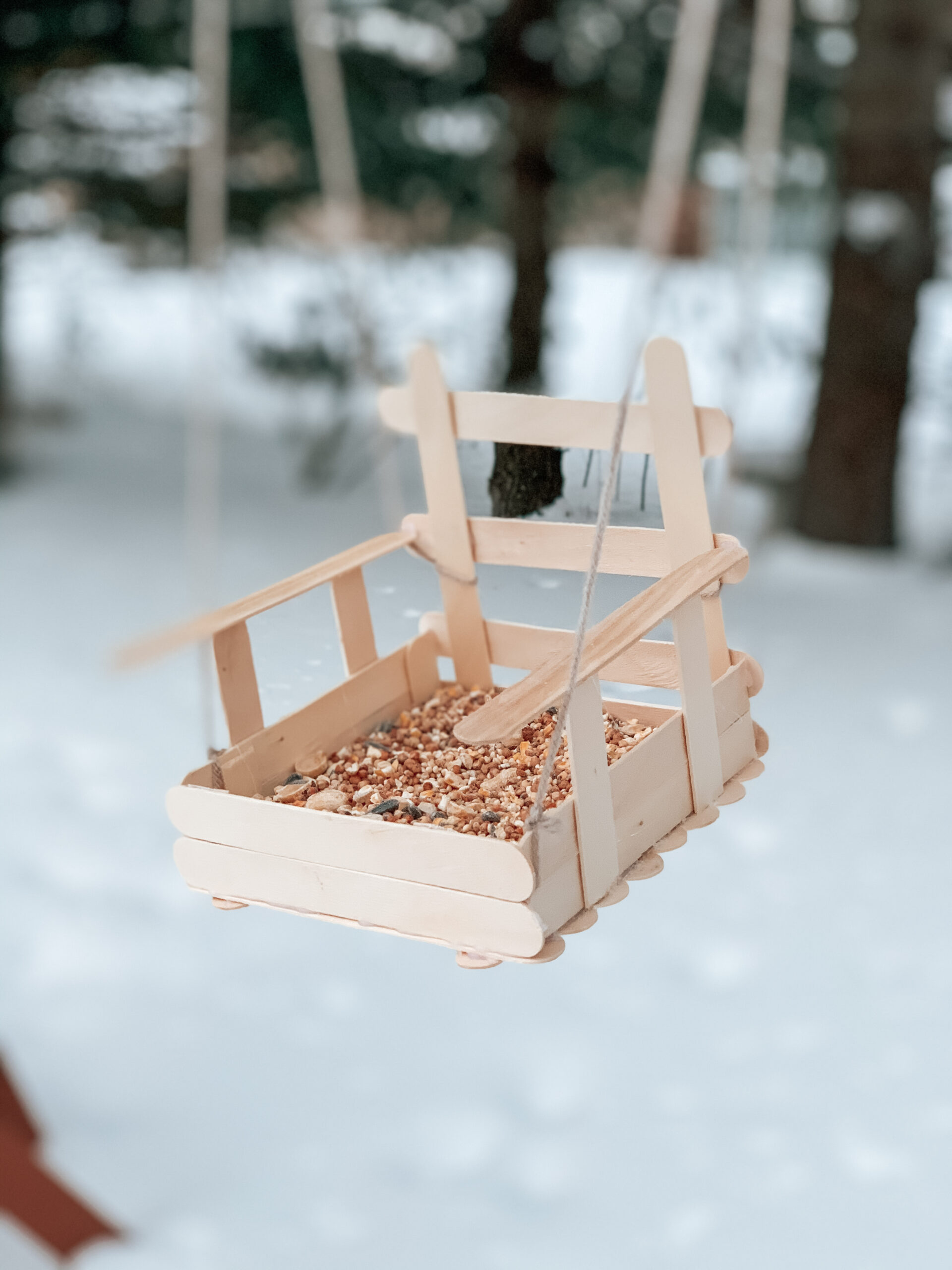 I didn’t take too many process pictures while creating this bird feeder because I was just experimenting. I saw some little “porch swing” bird feeders for sale online and decided to make my own out of popsicle sticks. My son enjoyed filling it with bird seed and watching for birds.

How I made This Porch Swing Bird Feeder: 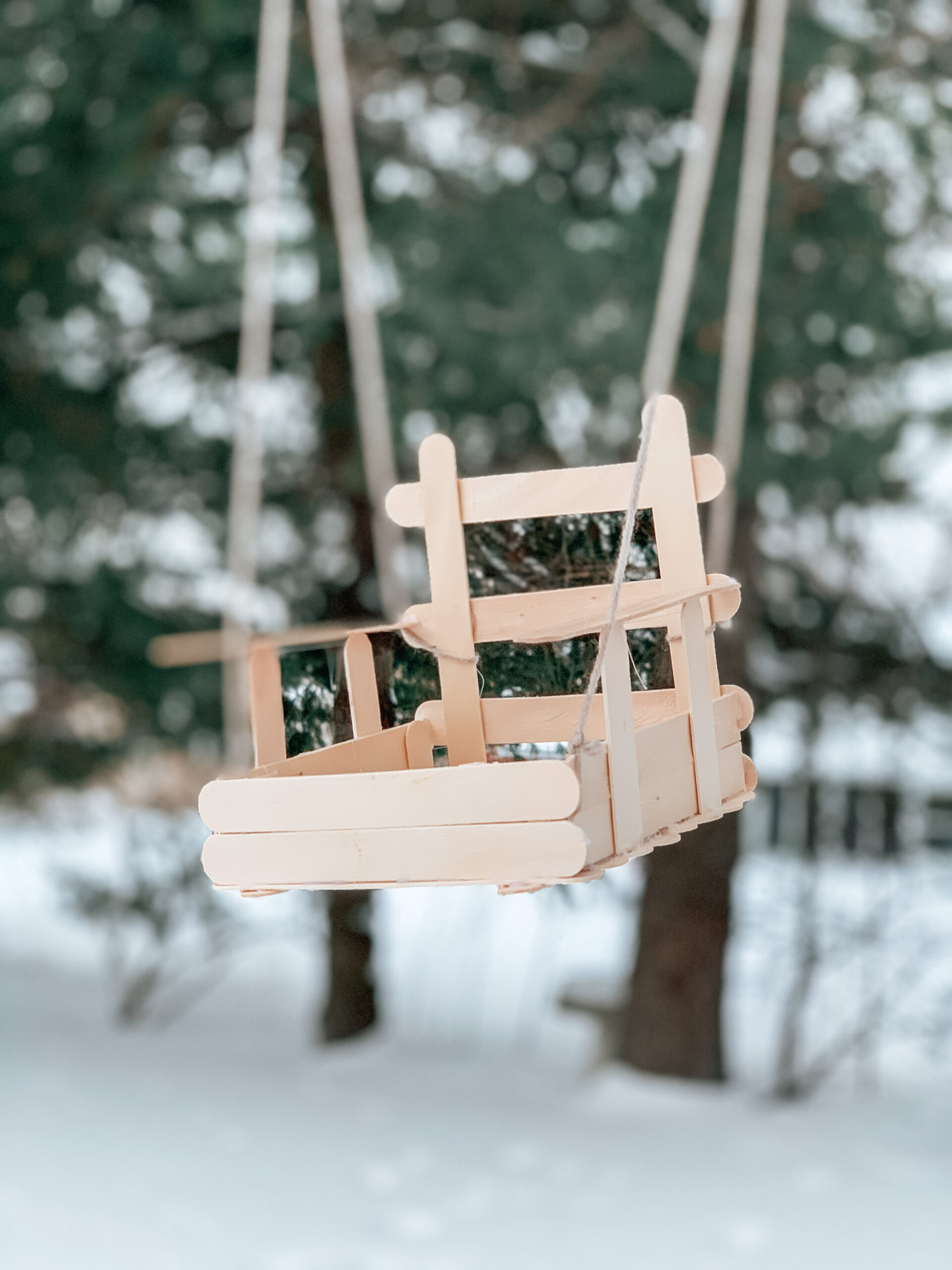 Then, I created the back of the “porch swing” by gluing three horizontal popsicle sticks to two vertical sticks.

Finally, I created the arm rests of the “porch swing” by trimming two popsicle sticks and then hot gluing them to a horizontal popsicle stick.

I hope you and your little ones enjoy these bird activities! Happy creating!

Brittany. My kids, ages 4 and 8 are going to love doing this activity. I can see them having so much fun pasting peanut butter onto the bird’s picture.

Thanks for letting us know that you guys had little luck with the crushed peanuts and raisins. We will definitely add some bird seeds to the peanut butter and see what our chances are.

This is so amazing! I would love to do this with my kids as our mother’s day activity. Thank you!

I love the Bird Feeder Box. We have a lot of birds visiting us in the back garden. This would be fun to create.

I love the swing feeder! That’s so cute! My kids would love to make these. We get a lot of birds in our yard.

These are all so creative. My daughter would love feeding the baby birds!