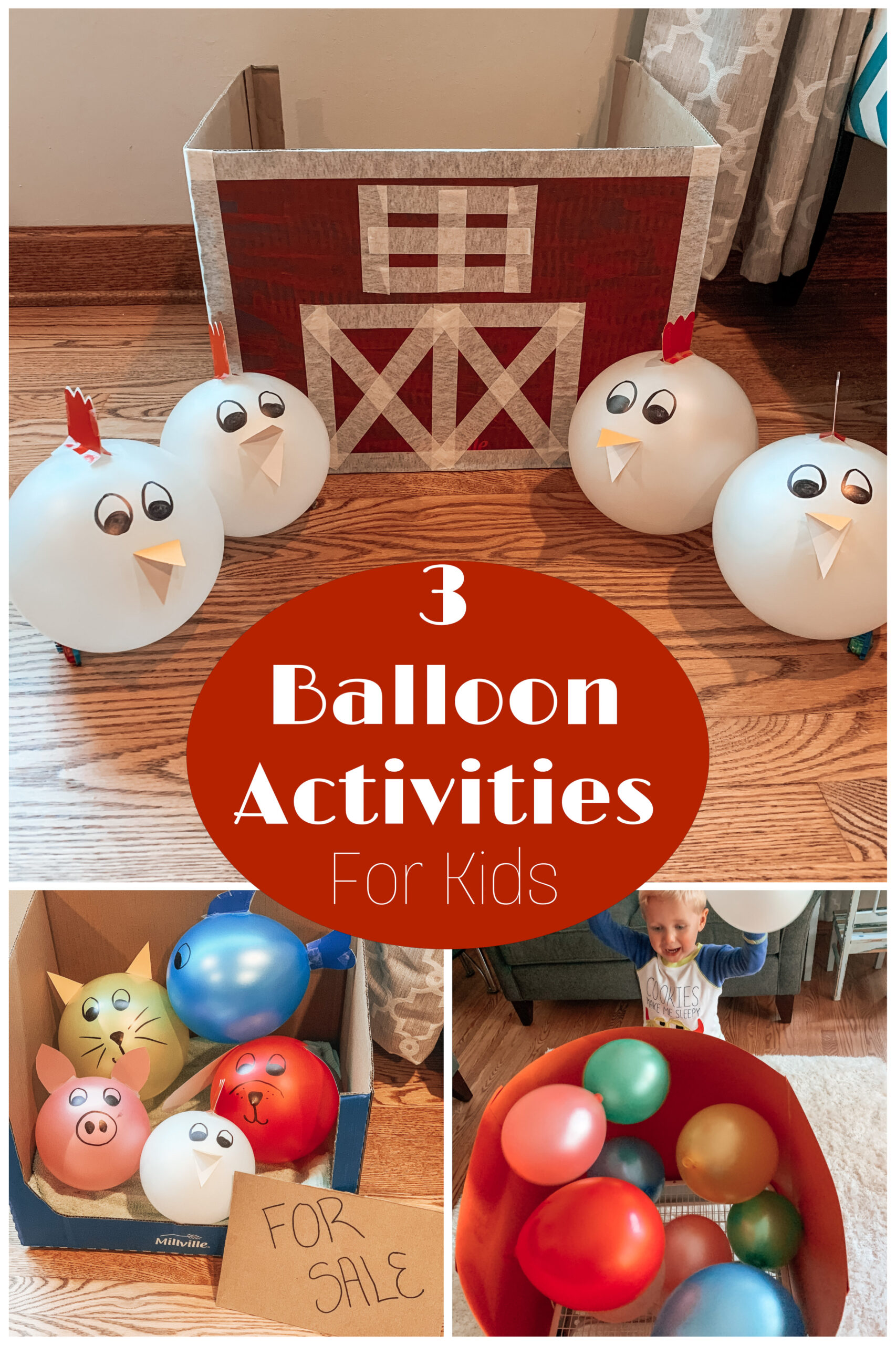 Oftentimes, we have balloons laying around our house. One of my son’s favorite before bedtime activities is to have a “dance party.”  We love to blow up a bunch of balloons and dance around the house with them.

Here are a few activities to do with all of those balloons you may have laying around the house! 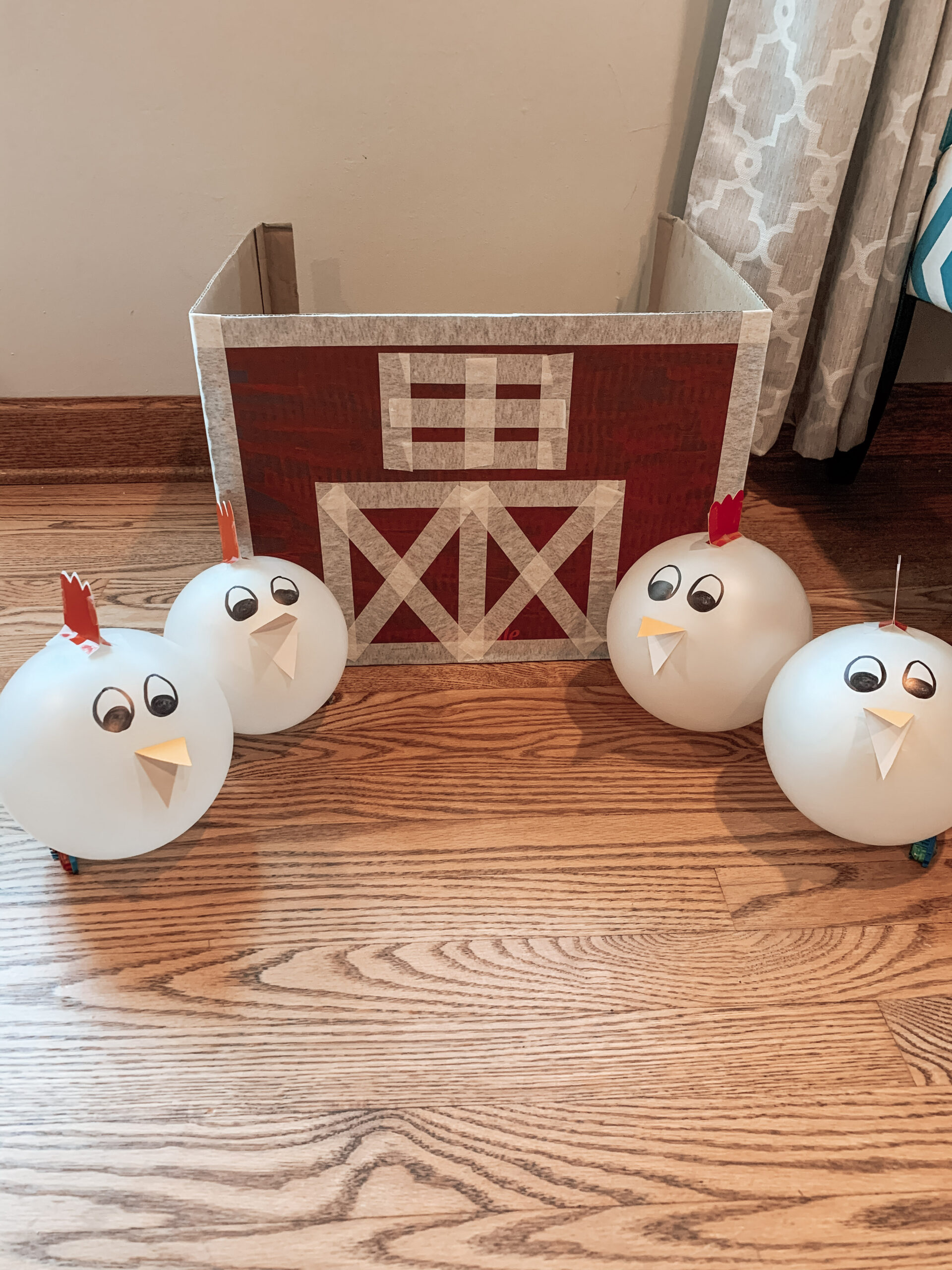 One day my husband started pulling on the tied part of a balloon and letting go, launching it across the room. This of course was an instant hit with my oldest son. He quickly picked up on this skill and I decided to make it into an official game.

I am not sure why, but I feel like anything involving chickens is cute. So I turned a box into a chicken coop and the balloons into chickens. I then had my son launch the “chickens” into the chicken. Hope you enjoy the balloon activity and a new game!

3. Show child how to launch the balloons by pulling back on the tied part and letting go

4. Launch the chicken balloons into their chicken coop 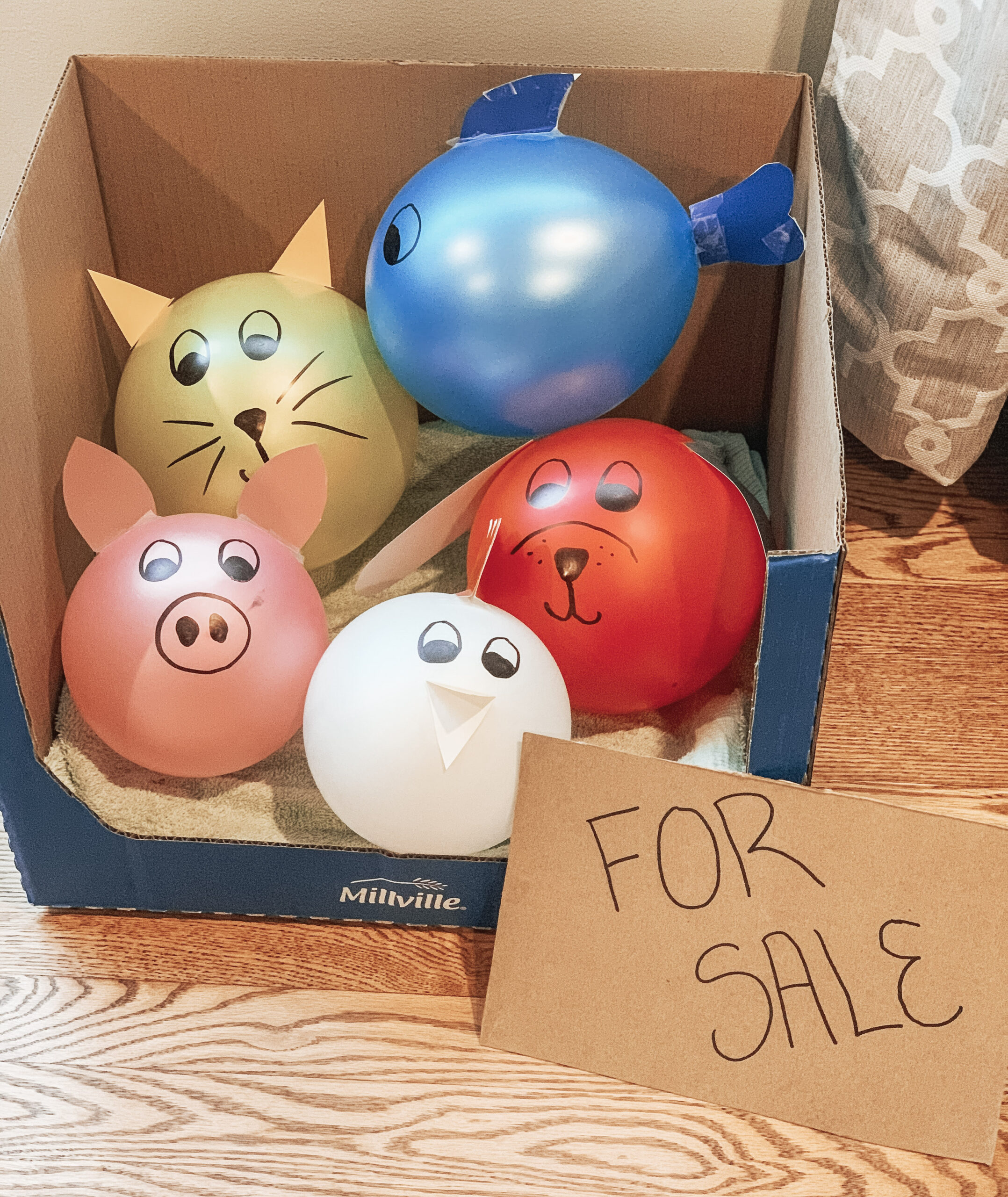 This is a great way to use balloons for imaginative play. When I made this for my kids we had lots of fun with our little pet shop. We “bought” the animals, petted them, fed them, put them to bed,…lots of playing. 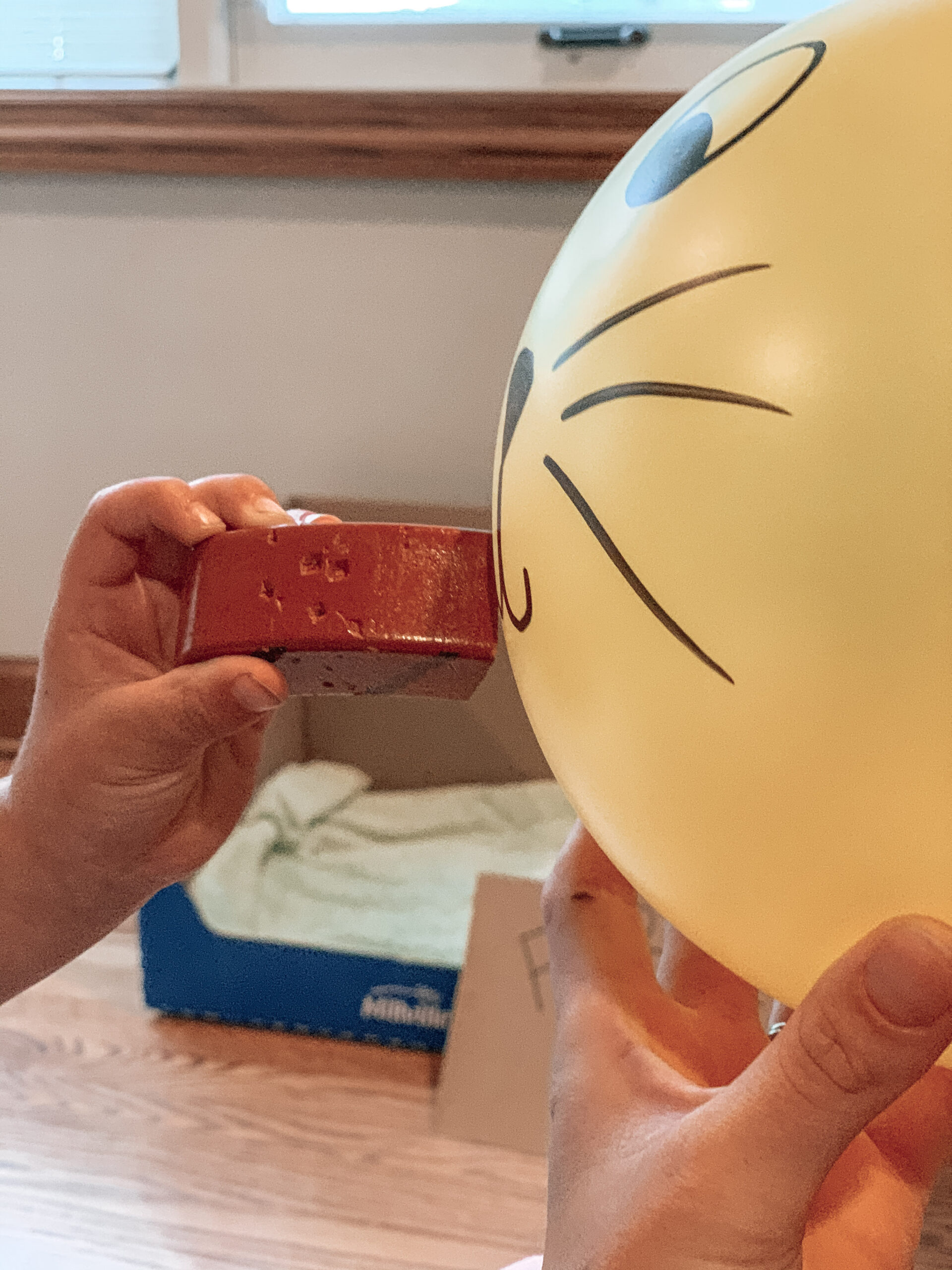 1. Decorate the balloons to look like animals using balloons, paper, markers, and tape

2. Place a blanket in the box 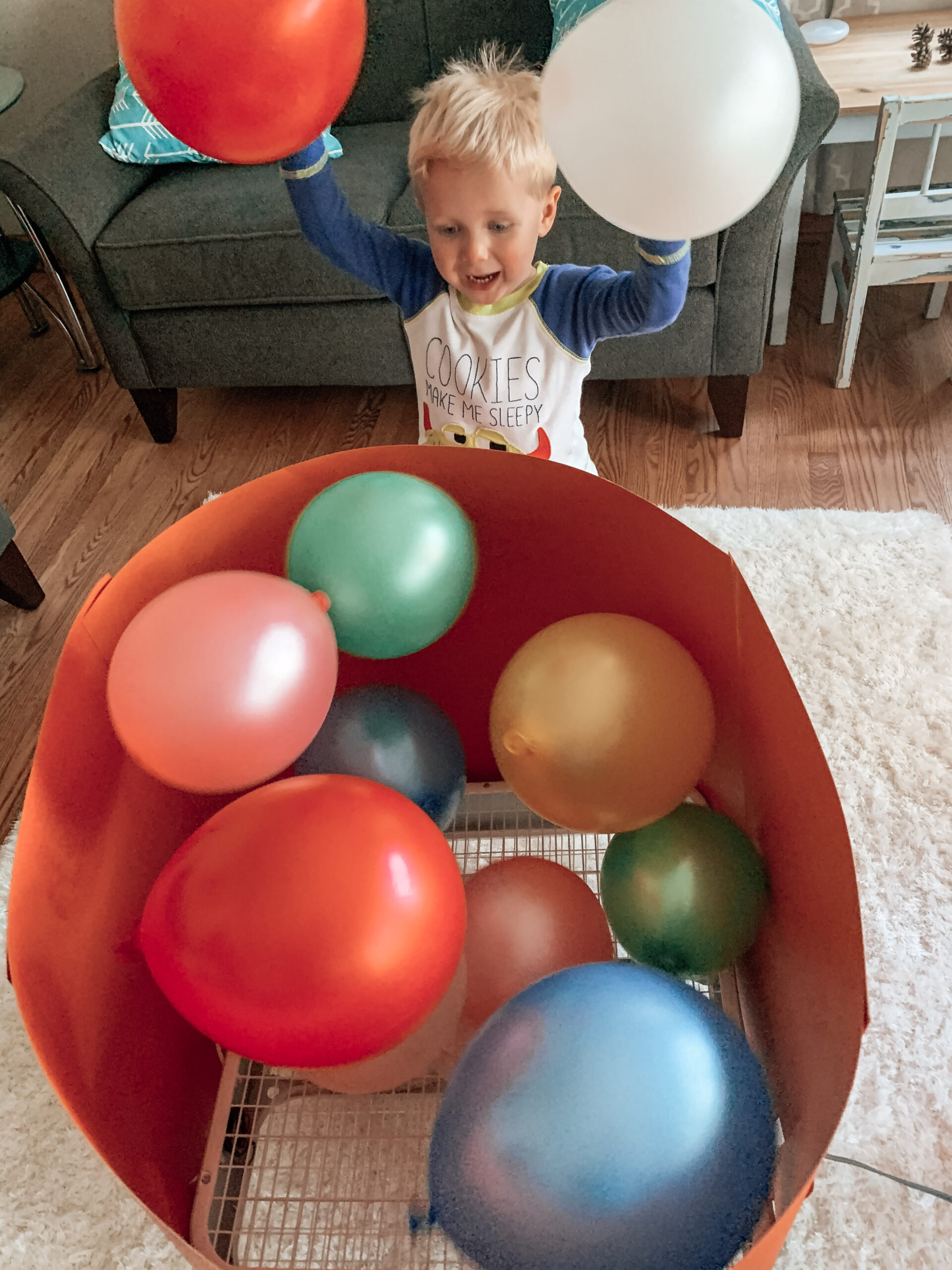 This activity took a bit of experimenting to make work. I quickly realized that when I laid a fan down on the ground, it did not work because the air flow was blocked. So I grabbed some food storage containers and propped it up. That problem was solved. Next, I tried two different sized fans. I found that a large box fan made the balloons swirl around and randomly pop out while a small fan made the balloons hover above. We thought both were a lot of fun.

fan, balloons, poster board (I used three pieces for the large fan and two for the small one), tape, something to prop up the fan to allow air flow (I used food storage containers)

1: Lay down a fan. Prop it up off the ground

2. Tape poster board around the fan

3. Blow up balloons and place inside the poster board

5. Have fun with your dancing balloons! 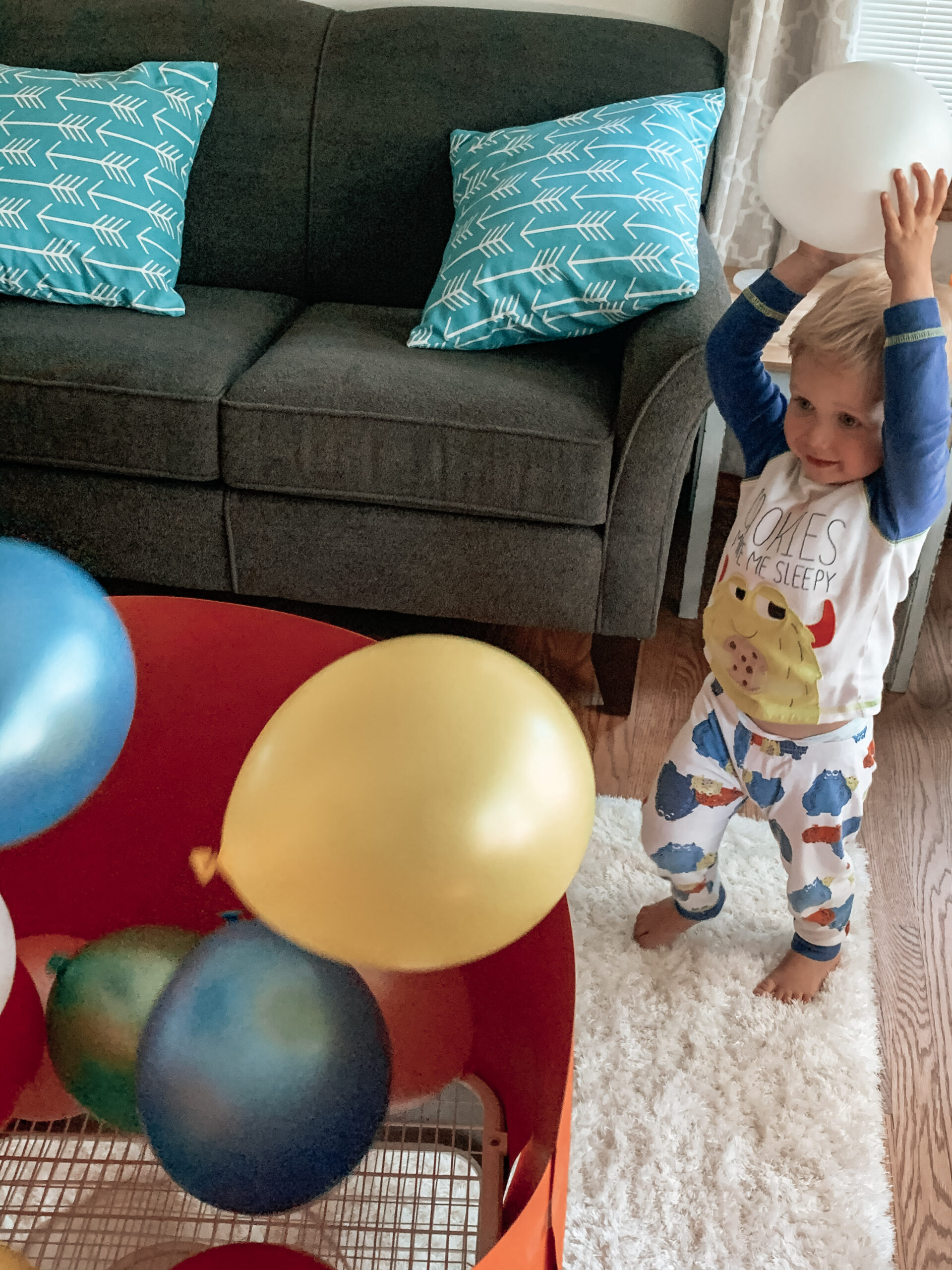 Wow! These balloon activities are the best, an instant favorite to our kids. Loved the concept and it’s very unique plus the balloon looks really cute and adorable.

These are such cute activities! I just know my kids would love them too.

I love the balloon farm. That is such a fun idea.

What a fun idea! These are especially great for upcoming summer activities.

These are adorable! And so easy, too. It is nice to have different activities to keep younger kids busy.